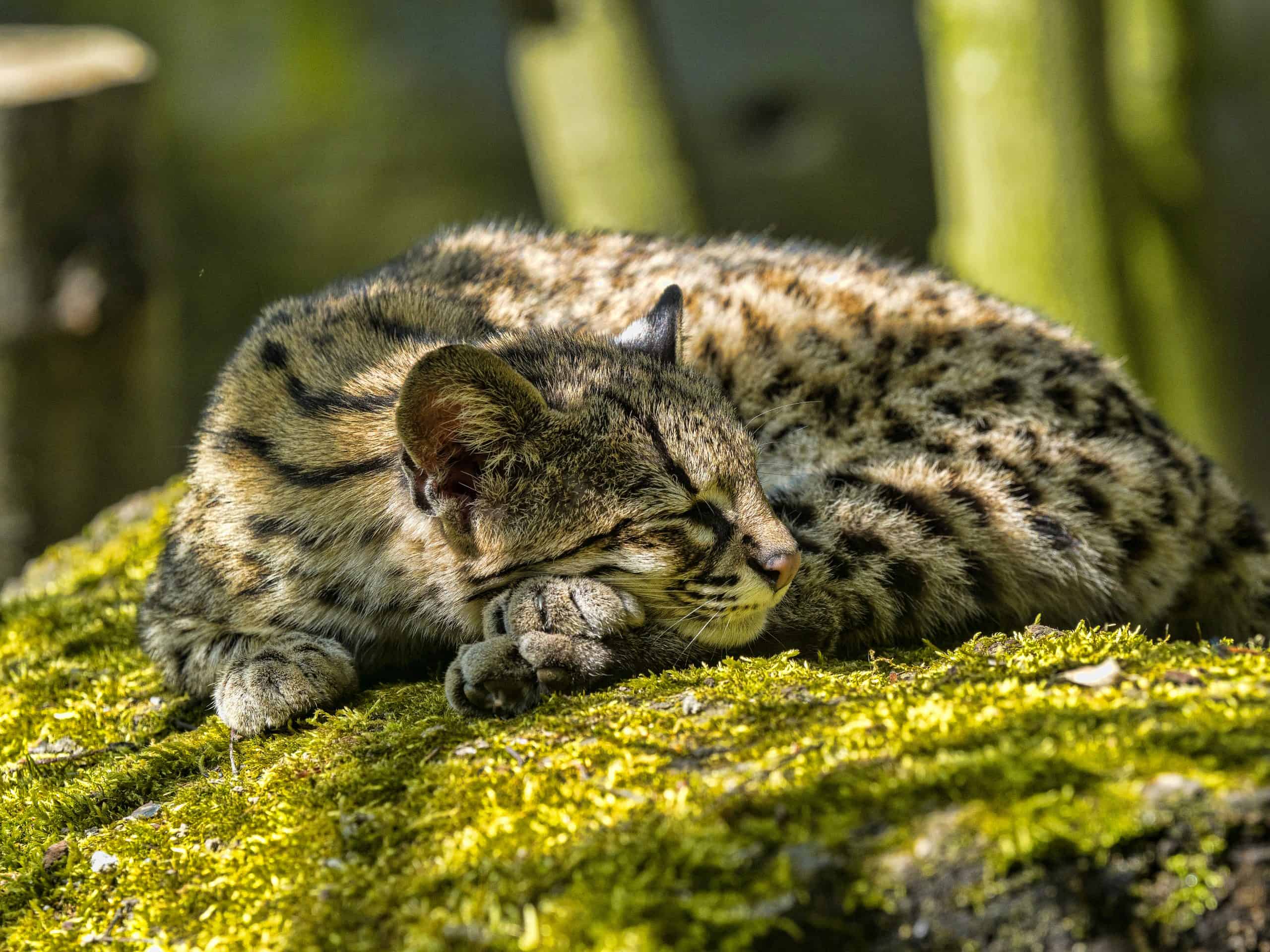 Death in the Forest: Deforestation Effects on Animals and What You Can Do

Deforestation affects animals in many ways. It causes habitat destruction, increased risk of predation, reduced food availability, and much more. As a result, some animals lose their homes, others lose food sources – and finally, many lose their lives. In fact, deforestation is one of the main causes of extinction.

Let’s find out how exactly this happens.

Deforestation is the total removal of trees or other vegetation from land. It can be caused by human activity such as logging or agriculture, but also natural disasters like forest fires. It has a negative impact on many species because it causes habitat fragmentation and loss.

But that’s not all. Animals are equally affected by forest fragmentation and/or forest degradation. Forest fragmentation is the reduction in the size of an intact forest area, or the development of gaps in a formerly contiguous forest. This means less space to live in, more competition, and higher risks of disease transmission. On top of that, they may have trouble finding enough food due to changes in plant composition and distribution.

Forest degradation occurs when forests are damaged or destroyed in ways that reduce their ability to provide ecosystem services. This process leads to changes in soil structure, water flow patterns, plant communities, wildlife populations, and more. These changes also have serious consequences for animal survival.

What causes deforestation and forest degradation?

There are many reasons why trees are being cut down. These include commercial exploitation for agriculture, fuelwood harvesting, timber, fires, mining, population growth, and urbanization. Let’s discuss a few of these quickly below.

Conversion to farmland is one of the biggest causes. Large-scale crops, like cattle ranching or growing soybean and oil palm, requires huge areas of agricultural lands. Fuelwood and firewood are used for cooking and heating around the world, and timber is used for building houses, furniture, and paper products.

Fires destroy or degrade millions of hectares of forest yearly. They are often used to clear land for other uses, but it’s also important to note that some degree of fire is a natural part of many ecosystems. The problem is when these natural fires increase in severity, frequency, and intensity, or grow out of control. As we burn fossil fuels, climate change worsens, and unnatural fires are becoming more and more common. This worsens climate change even more, as trees burn down and release their carbon dioxide. The 2021 wildfires in British Columbia are a perfect example of this.

Whether natural or man-made, alter the structure and composition of forests, sometimes permanently, and usually with drastic effects on forest residents. You may recall reading that Australia’s 2020 bushfires killed or harmed almost three billion animals!

Most minerals require vast tracts of land to dig up, and once extracted, must be transported to processing centers. In turn, this requires hundreds of miles of road construction, which leads to further degradation. With new roads, people are able to access new areas that were previously inaccessible, and thus begin to clear the forest.

Road building is actually a major cause of deforestation, even if the road is just being built to reach somewhere else. This applies to anything from dam sites to military bases or even to highways cutting across a forest.

Many of these drivers are also related: as populations increase around the world, demand for meat increases, and so more land is cleared for cattle pastures. This is particularly a problem in Amazonian forests.

Or, farmers expand into previously forested areas in search of fertile soil to meet increased market demand for commodities. These sorts of compounding drivers can increase the rate of deforestation exponentially.

This means that essentially, deforestation is an economic problem.

Why does deforestation affect animals?

Wild animals need suitable habitat: areas where where they are safe, secure, and comfortable. They use these areas for resting, sleeping, feeding, breeding, hiding, and escaping predators. But when we disrupt these areas, animals lose access to important resources and become exposed to new threats.

What are the effects of deforestation on animals?

It can cause them to completely lose their homes or be forced out of their natural range.

It can change existing habitats and remove sources of shelter, water, and food, such as fruit-bearing trees.

It also causes soil erosion, which can change the landscape and make it harder to find food.

And it worsens climate change by increasing greenhouse gas emissions. This can affect weather and water availability, and increase the risk of natural disasters.

Animal species threatened by forest loss may also face increased competition with others, and can be at higher risk of being killed by predators who have also lost their natural habitat.

Thus, the impacts of deforestation may be direct or indirect, but the end result is the same: population decrease and higher risk of extinction.

Let’s get a bit more into each of these below.

Deforestation directly causes climate change by releasing carbon dioxide and other greenhouse gases previously stored in trees and soils. In tropical countries, deforestation causes the emission of millions of tons of carbon dioxide each year.
In turn, this causes changes in weather, precipitation, and temperature, both locally and globally. Locally, animals may be forced to migrate away from their home ranges if the climatic conditions have changed and they can no longer obtain what they need – whether food, clean water, or shelter. And globally, changes in one part of the world can effect weather patterns in another. For example, forest loss in Central Africa has been shown to affect rainfall in the U.S. Midwest [1].

And one of the indirect consequences of deforestation is that it’s also harder for species to adapt to climate change. Whether through simple clear-cutting or partial forest degradation, suitable habitats end up fragmented. And most tropical forest areas are now too disconnected to allow animals to escape the effects of climate change.

It’s fairly obvious that clearing trees and other types of vegetation reduces the space available for food, shelter, and breeding.

But what happens then?

Suitable habitat – the intact area that can support wild animals – becomes little islands surrounded by disturbed land that is used for agriculture and other activities.

These landscapes are less able to support large populations, which leads to the loss of genetic diversity. Less space is available for movement and reproduction, leading to increased competition among individuals, increased disease transmission, decreased ability to find mates, and more likelihood of predation.

Eventually, wildlife moves into areas with lower quality habitat, like secondary forests. And this compounds the problem because these areas can never provide the same natural resources as primary forests.

Deforestation reduces the ability of the remaining forest to withstand natural disasters such as fires or droughts. For example, trees and other vegetation help to moderate water flow, by retaining it longer and releasing it more slowly. Without this support, the water cycle can change dramatically, leading to much drier and hotter conditions. Similarly, without tree roots helping to minimize soil erosion, the risk of landslides increases dramatically. And a degraded forest is more likely to succumb to a drought, or to an extreme weather event.

As a result, many species will suffer greater mortality rates during these events. And this means that some might not survive long enough to reproduce, while others could lose their entire population.

As we’ve seen above, degraded forest ecosystems often lack key features needed for survival. When there are less – or no – plants around, there isn’t anything providing shade, fruit, seeds, or leaves. There’s nothing to eat, hide behind, or sleep under.

Thus, without plant cover, animals must either live closer together, or spend time exposed to danger. Either way, they’re more susceptible to attacks from predators.

Unsurprisingly, with less untouched forest available, and more human presence in areas that animals previously lived in, human-wildlife interactions happen more frequently. Animals may try to cross and highways and be hit by cars, or wander onto farmland or into towns, where they have to be killed in self-defense.

While there are still healthy patches of forest left, wildlife can usually avoid direct contact with humans – although it becomes more difficult. But when human activity destroys the last remnants, people come into closer proximity than ever before. This increases the chance of conflict, especially where there is hunting. And deforestation also allows hunters access to previously inaccessible parts of the landscape.

(Incidentally, this can also negatively affects humans. For example, in indigenous lands, deforestation has caused a decrease in overall wildlife status. Hunters must expend more effort to obtain meat from some of their preferred species, both because of increased hunting distance and animals that are in worse health.)

Habitat loss means biodiversity loss – and that means loss of food sources. Some species rely heavily on specific plants for food sources. For example, elephants depend almost entirely on grasses for nutrition; if there aren’t any, they will starve. Monkeys eat fruit off of trees, so without healthy trees nearby, they won’t get much at all!

And when one animal species is prey for other, larger ones, the effects ripple up and down the food chain. If they don’t die directly due to starvation, they can become weak vulnerable to diseases.

How can we stop deforestation?

We’ve seen above that the impacts of deforestation can be dire for wildlife. So how do we stop it?

To answer this question, remember that it is an economic problem. Whether for commercial exploitation or subsistence farming, the forest is being cut down because it’s more valuable for other uses.

This makes most solutions very difficult. For example, one option is to recognize indigenous lands. Studies have found that these lands have better management of their natural resources, including less species decline and less pollution [2]. But this is often politically tricky because many governments are reluctant to give up such title – and with it, the possibility for commercial exploitation.

Most of the options out there – designating national parks, reducing agricultural expansion – run into the same problem. And this problem is particularly difficult to solve in tropical countries, like those of Latin America and West Africa. These countries often find they have no option but to sell their resources to wealthy, developed countries like North America or Europe.

So the only solution is to change the economic incentives.

How do you do that?

You make sure the forests worth more alive than dead.

We do that by valuing them for something they do extremely well: store massive amounts of carbon. You can read more about how our model works here.

And we’ll just say that our projects have done their job exceptionally well. They prevent the emission of 700 million tons of carbon dioxide in 4.5 million hectares of forest across Asia, Africa, and South America. And they protect hundreds of species of animals, plants, birds, and insects, including dozens of vulnerable, threatened, and endangered species.